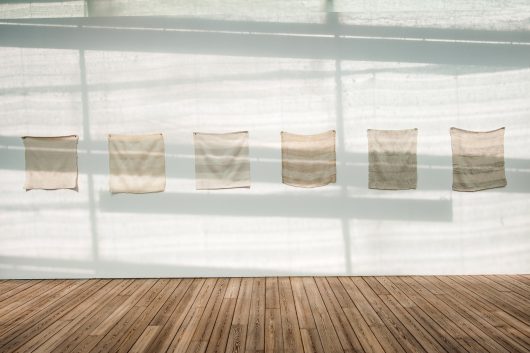 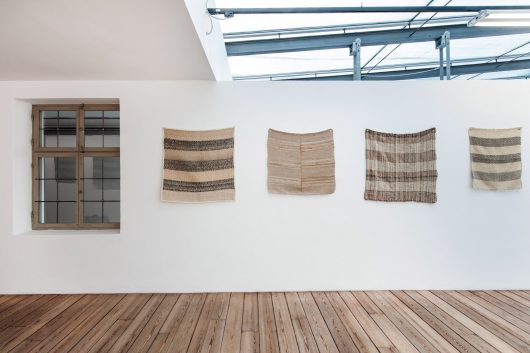 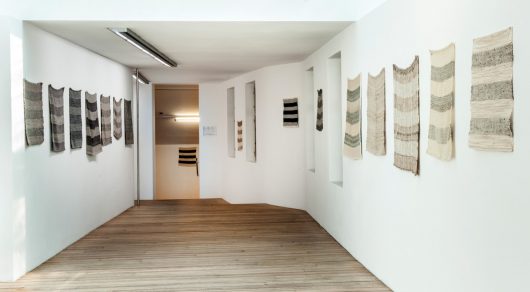 From 2005 to 2013 Mirra was Loeb Associate Professor of the Humanities at Harvard University and taught courses in expanded sculpture and environmental art practices. Previously she was Senior Lecturer in both Visual Art and Cinema and Media Studies at the University of Chicago.

Acts for placing woollen and linen

In 2015 Helen Mirra put out an international open call, appearing in twenty-three languages, for simple weavings with a particular set of qualities: ‘a more or less square, plain-woven piece, of a width matching the length the weaver’s arm. Yarn of local & undyed plant and/or animal material, in seven alternating stripes (of shades or weights) the width of the weaver’s hand (incl. the thumb).’

Participants each made two pieces, and from each pair of weavings, one was circulated to another participant. The other piece became part of a temporary collection brought together by Mirra, which has been exhibited in whole or in part in various exhibition spaces, with the title Standard Incomparable. The materials used in the weavings include alpaca, angora, bamboo, bison, cashmere, cotton, hemp, jute, linen, mohair, miscellaneous plant matter, silk and wool.

In spring 2020, Standard Incomparable will be on view at CAMPLE LINE in Dumfriesshire in southwest Scotland. The entire building will be given over to the weavings, and over the course of the exhibition’s last three weeks, fifty-seven of the pieces will be taken from the gallery one-by-one, and placed outside in the surrounding landscape where they will be left.

Each weaving will leave the gallery with a person by foot, and be placed somewhere that seems right for it. The distance and direction walked will be determined by the person carrying the weaving. Three pieces will remain at CAMPLE LINE for the duration and will be returned to their weavers. In this way, as Mirra says ‘the collection will be let go of.’

As with the production of the weavings, the ‘decremental’ process of their dispersal will entail individual actions within a collective undertaking. It also extends the relationship between body, material and weaving established by Standard Incomparable to include factors such as ground, field and walking.

In evolving Acts for placing woollen and linen, Mirra has referenced two pieces of relatively short-lived 17th century legislation – the ‘Burying in Woollen Acts’, signed by Charles II into English law in 1666 and 1680, which made it mandatory to line coffins and shroud bodies in English wool only, and the related ‘Act for burying in Scots Linen’, passed by the Parliament of Scotland in 1686. Additionally, she has an enduring interest in bleachfields – open areas established in and around mill towns in 17th c. Belgium and the Netherlands, as documented in paintings by Jacob Ruisdael and Nicholas Molenaer, and in 18th century Scotland and England, and used for spreading semi-finished linen cloth on the ground to be purified and whitened by the action of the sunlight. Here, the weavings will be laid out on the ground and then left, ultimately to be reclaimed by the soil.

Cample Mill itself is an especially poignant location for Acts for placing woollen and linen. It operated as a weaving mill throughout the 19th century, producing tweed and blankets, though less successfully than some of the nearby mills sitting on the River Nith or its tributaries. Ultimately, it had ceased functioning as a mill by the end of the century and was repurposed several times throughout the 20th century – a place itself from which weaving and all its associated activity departed.