Still Life – a series of three online workshops over March, June and August
Developed and led by Victoria Miguel with Sarah Grace Dye and Héloïse Werner

Free |14 places for the writing workshop
Takes place on zoom

Though part of a series, the workshops can be booked on an individual basis. Places available will vary from workshop to workshop 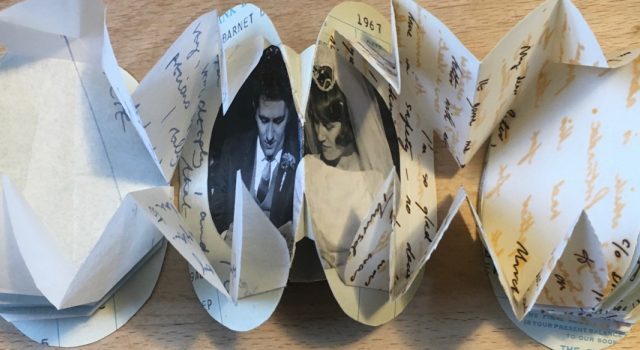 Join writer Victoria Miguel for the first of three interdisciplinary workshops, which will take place over March, June and August.

This first writing workshop will take place 24 March, with the opportunity of a one-to-one follow up session on 31 March. The dates of the workshops in June and August will be confirmed in due course.

Collectively titled Still Life, the workshops will use the ordinary domestic objects and materials that surround us in our homes as a widely accessible source of inspiration. Through writing, singing and book-making, the workshops will explore materials found in the home – from tableware and food waste to letters and other written items – and use techniques to reuse, recycle and transform them into art.

About the writing workshop

Still Life begins with a writing workshop in March led by Victoria Miguel, during which you will produce some writing that can later be transformed into books and song. In this first workshop you will explore different techniques for rewriting and reworking texts readily available at home—books, receipts and digital content—into new work, giving you the chance to experiment with different approaches.

About the following workshops

If you would like to develop and use your writing as material in the two following workshops – concertina bookmaking with Sarah Grace Dye and a singing workshop with Héloïse Werner – you’ll have the opportunity of a short one-to-one session with Victoria the following week on 31 March, 6-8pm.

Héloïse Werner’s singing workshops will begin with a group workshop exploring singing techniques that relate and respond to the objects and things around us.

Information about what to save in preparation for Victoria and Sarah’s workshops will be shared two weeks in advance of their workshops.

About the workshop leaders

Victoria Miguel is a writer. Her work has been published and presented by Triple Canopy, Summerhall, and Glasgow International. She worked for the John Cage Trust (2001-2007) and has been a specialist in Cage’s work, creating unique performances, for more than a decade. Last year she began a PhD at the University of Glasgow exploring Cage’s writing and created the writing project, After John Cage: ‘Writing Through’ Carlyle and Emerson for Cample Line.

Héloïse Werner is a highly experienced singer, composer and improviser. She is co-director of award-winning contemporary quartet The Hermes Experiment with whom she has commissioned over 50 composers and produced a large number of concerts. Héloïse is one of BBC Radio3’s 31 Under 31 Young Stars 2020.

Sarah Grace Dye has worked with artists’ books for over ten years and is one of the founders of Sheffield’s Artists’ Book Centre. Last year, she contributed a book a month to Instagram’s global #areyoubookenough and participated in a virtual residency with Omenica Arts Centre in British Columbia, after a six-month art correspondence project with Canadian Visual artist Cat Sivertsen. She is currently involved in a number of artist book collaborations in conjunction with SIX Project Space.

Do I need to have any experience to participate?

What materials or tools will I need?

We will send a list of what you will need for the workshop upon booking. You should be able to source items easily around the house

Where will the workshop take place?

The workshop will take place on Zoom. A link will be sent to you once you book.

Do I need to do much preparation in advance?

You’ll need to gather the materials ready, but no practice or work needs to be done in advance.

If you would like further information prior to booking, email us on info@campleline.org.uk

Please note, the session will be recorded, and will be available to those attending to watch again as a replay