12: A collective of women writers 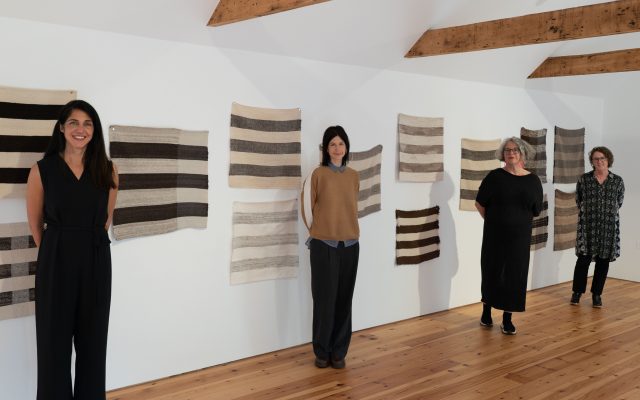 In September 2020 CAMPLE LINE launched a collection of newly-commissioned poetry written by members of 12 and performed at CAMPLE LINE in response to Helen Mirra’s exhibition Acts for placing woollen and linen. Taking the seven alternating stripes of the weavings themselves as a starting point, the collection of seven-line poems written by Tessa Berring, Lynn Davidson, Marjorie Lotfi Gill, Jane Goldman and JL Williams also incorporate responses to one another’s writing, which echo the very nature of the exhibition – an undertaking that is at once collective and individual.

12 is a women’s poetry collective who write and respond to one another’s writing. The poetry collective originally formed at the request of Sophia Hao, curator at Cooper Gallery in Dundee, in order to create work echoing the collaborative Feministo Postal Art Event of 1975-77. In 2018 they performed in response to and amid Emma Hart’s exhibition Banger at the Fruitmarket Gallery, and in 2020 created new writing for Cooper Gallery through written responses shared weekly.

The writers in the original collective were Tessa Berring, Anne Laure Coxam, Lynn Davidson, Georgi Gill, Marjorie Lotfi Gill, Jane Goldman, Rachel McCrum, Jane McKie, Theresa Muñoz, Alice Tarbuck, Karen Veitch and JL Williams. Since then, Rachel McCrum and Karen Veitch exchanged places with Em Strang and Lila Matsumoto.
Tessa Berring lives in Edinburgh having spent most of her childhood in West Yorkshire. She studied sculpture and drawing at Edinburgh College of Art and has since shifted her visual arts practice into a deeper engagement with language and poetry. Her poetry has recently appeared in Gutter Magazine, Magma, and The Rialto. In 2017 her poetry sequence Cut Glass and No Flowers was published by Chicago-based Dancing Girl Press.
Lynn Davidson is a New Zealand writer living in Edinburgh. Her latest poetry collection Islander is published by Shearsman Books in the UK and Victoria University Press in New Zealand. Her poetry has appeared in various journals and her short fiction has been broadcast on national radio. Her novel Ghost Net was released in 2003. She had a Hawthornden Fellowship in 2013 and a Bothy Project Residency at Inshriach Bothy in the Cairngorms in 2016. She has a doctorate in creative writing and teaches creative writing.
Jane Goldman was born in the Scottish borders and raised in Northumberland and South Yorkshire. She is currently Reader in English Literature at the University of Glasgow, where she lectures on modernism and the avant-garde; poetry and poetics, and gender, sexuality and feminism. She has performed at a number of venues and stages across the UK including CAMPLE LINE in 2018. She has published a number of books on Virginia Woolf as well as being published in a number of magazines and journals.  Border Thoughts  (Sufficient Place, 2014) is her first collection.
JL Williams was born in New Jersey and studied at Wellesley College and on the MLitt in Creative Writing at the University of Glasgow. Her poetry has been included in many magazines and anthologies, and she has published three full collections and a pamphlet. Williams is particularly interested in expanding dialogues through poetry across languages, perspectives and cultures and in cross-form work, visual art, opera and theatre.
Marjorie Lotfi Gill was born in New Orleans, spent part of her childhood in Tehran and has lived in Edinburgh since 2005. Often her writing begins with an artist’s image or a piece of art is worked into the narrative and she has worked with numerous arts organisations in Scotland. Her poems have been published by various journals and her most pamphlet Refuge was published by Tapsalteerie Press (2018). She is a facilitator of creative writing, founding and running the Belonging Project and Open Book, which promotes reading groups for the vulnerable and for adults in the community. She is also the current Chair of Trustees for the Wigtown Book Festival.