Inspired by the arrival of Spring

freedom, the return of the light

resurgence of the natural world, connection with the land 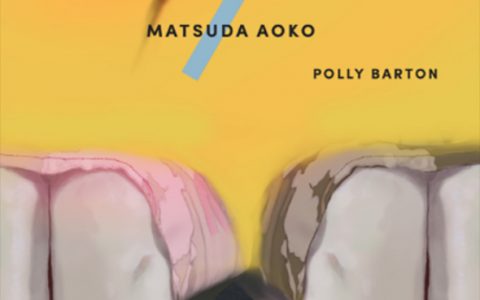 Matsuda Aoko
Where the Wild Ladies Are

Iconoclastic, witty and subversive, these linked short stories are inspired by traditional Japanese myths, transmuted to contemporary Japan. The same characters appear across the collection, observed from different perspectives or simply glimpsed in the background in one story, to emerge more fully in another. Here the boundaries between the living and the dead are blurred: ghosts return to advise, love and complain to the living in the quotidian settings of offices, hotels, shops and flats, whilst transformational shape-shifting between human and animal form offers liberation, hope or perhaps simply another perspective

A story of self-transformation and re-invention, of survival, immigration and uncovering truths. Callie or Cal as they choose to become narrates their story of growing up in 1960s Detroit as a second generation Greek immigrant. The history of their family is gradually revealed as the gene which they carry makes itself apparent, for although raised as a girl, Cal was born intersex. A gradual self-discovery necessitates the unpicking of the family history from a Greek village in Turkey to American suburbia. Told with a sometimes playful humour this complex story explores how decisions made as a means of survival (fleeing from the sack of Smyrna, the Second World War, riots and escape from an ill-informed medical system) result in actions that resonate across the generations. 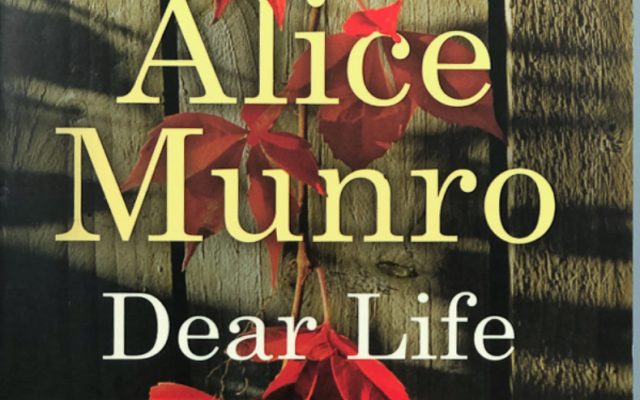 Written mostly from the female perspective these short stories, set in small-town Huron County, Canada in the second half of the twentieth century quietly reveal how transformative life can be. The seemingly incidental occurrences of apparently ordinary lives, often rendered uncanny, result in significant changes in the experiences of her characters. Interested in the position of women, many of whom fall outside the perceived norms of the time, Munro’s cool dry glances at life gesture towards rather than announce, show but never conclude.

Where the Wild Ladies Are 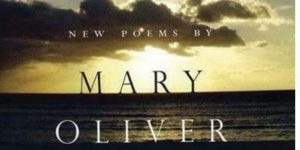 Mary Oliver
Why I Wake Early

Insects, stones, daisies, beans, the ear bone of a pilot whale washed up on the shore  – the unremarked and overlooked, the perhaps seemingly un-poetic – are the subjects of Oliver’s poems in this life enhancing, life enforcing, collection. Through her minute, delicately balanced observations of the ways of the natural world, she offers an awakening to a world that given the time can be observed and deeply considered but never possessed. She writes lines of great beauty and expansiveness with reverence and respect which touch upon the fundamental questions of our existence. 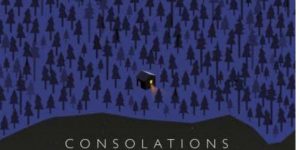 Sylvain Tesson
Consolations of the Forest

Sylvain Tesson, trans, Linda Coverdale, Consolations of the Forest. Alone in a Cabin in the Middle Taiga (first published in French, 2012), Penguin, 2014

Tesson kept a daily diary for the six months he spent living alone in a cabin at the edge of a cedar wood on the shores of Lake Baikal. Fortified by vodka and his library of carefully chosen books, with two puppies for company and the occasional visitor, he writes an honest account of surviving in a wilderness. Both the daily work necessary for sustenance and warmth as well as his adventures into the wild are detailed along with vivid descriptions of the majesty of the landscape, the changing of the seasons and the burgeoning flora and fauna which the arrival of Spring and Summer bring. 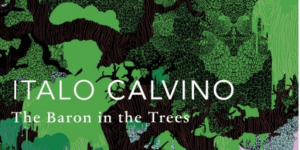 Italo Calvino
The Baron in the Trees

In the year 1767, Cosimo, still a child, leaves the dining room table where his family is enjoying a formal supper, goes into the garden and climbs into the trees. He remains up in the leafy canopy for the rest of his life, observing the ways of man and the cycles of the natural world from the chestnuts, figs, oaks and beeches that become his home. The constraints of the Italian nobility are replaced by the freedoms that the natural world offers, although here too Cosimo’s life is restricted by his promise never again to touch the ground. Despite this, he travels, falls in love and makes contact with the greatest thinkers of the day, cultivating both a freedom of mind, remaining to the end, in charge of his own destiny. Part fable, part gentle satire, part lived philosophy (Thomas Paine’s The Age of Reason and Jean-Jacques Rousseau’s Theory of Human Nature are drawn upon), Calvino writes with a lightness of touch, and playfulness with form. His philosophical enquiry is skillfully embedded in a narrative which is modern, yet carries the atmosphere of a novel by Henry Fielding, a favourite author of a book-obsessed brigand, whom the Baron befriends, and whose literary leanings lead him to a sticky end! 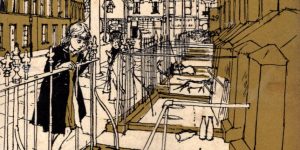 Rumer Godden
An Episode of Sparrows

Set amidst the ruins of post war London, this is a story of determination and triumph against the odds, portraying the world as seen through the eyes of a child. Deserted by her mother and left in poverty in the unwilling care of a couple yet longing for her mother’s return Lovejoy has to survive on her wits until she impulsively steals what she discovers to be a packet of seeds. This sets her on a quest to secretly and with much scheming and difficulty, make a garden. In so doing Lovejoy finally has something of her own, until the adult world threatens to intervene and destroy her hard fought for prize. Yet, when all seems lost, help arrives from a surprising source. 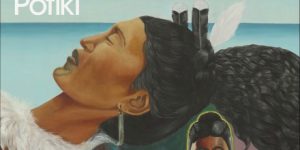 This powerful story of a Māori community resisting the destruction of their ancestral land weaves together struggle, memory, myth, song, family and community. Grounded in the cycles of birth, death, planting, nurturing and harvesting, multiple voices portray the struggles and joys, the repressions, acceptances, hopes and the spirit of generations of families as they hold out against attempts by developers to remove them from their own land. Grace’s beautiful prose also reads as a statement about the strength of Māori culture emphasised by the Māori language which is ever present in the novel. Their skills, beliefs and community structure are reflected most profoundly in Toko, the potiki (last born), the profit child, whose life is celebrated in a carving in the Wharenui (meeting house) at the centre of community life. 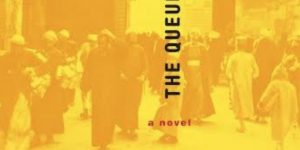 Following the uprising in The Square known as The Disgraceful Events, Yehya-Gad el-Rab Saeed and his friends attempt to navigate the bureaucracy of The Gate as they seek permission for the operation Yehya urgently needs to remove an army-issue bullet lodged in his pelvis. Months are spent amongst thousands queuing for proof of citizenship, work or medical treatment, each at the mercy of the Ideology Committee operating from The Gate which never opens, but releases increasingly extreme measures. A community develops amongst these new residents: intrigues, friendships, a marriage proposal, businesses, kindnesses and petty squabbles, as the queue becomes a place of safety as much as one of anxiety and hope in this dystopian commentary about the uprising in Cairo’s Tahrir Square during The Arab Spring. 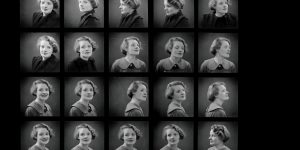 Personae began as a postscript to a novel written by filmmaker and poet Margaret Tait (1918-1999), but evolved to become a much more wide-ranging amalgam of her thoughts, experiences, observations and preoccupations – as artist, as a woman and as a medic in the Royal Army Medical Corps in India in the Second World War. ‘It all has to go together.’ Tait mostly left the words as they were the moment they were written – ‘I am uneasy with things which are complete’ –  and in parts it is as though she is working through her thoughts on the page. This fluid, unedited and montaged approach, with everything given equal attention, gives insight into her work, in all its different forms. 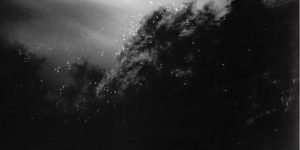 Georges Didi-Huberman
Survival of the Fireflies

Glimmers of fireflies – imagistic expressions of fleeting moments of hope in the darkest of times, flashes of joy, the exuberance of youth, signifying too clandestine writing and images which resist by bearing witness to manipulations and destructions of societies and peoples. Are the fireflies rendered invisible in the glare of mass media, or have they been extinguished and lost to us forever? Or perhaps they have simply moved elsewhere, to momentarily shine bright again in the night, to be re-discovered. If only we can retain the ability to see clearly, to stay attuned to those transitory flashes which illuminate the possibilities that lie between our gaze and our imaginations. 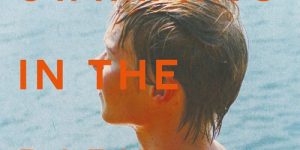 Tomasz Jedrowski
Swimming in the Dark

Living in exile, Ludwik reviews his past, addressing Janusz his first love, as he recollects the heady freedom of their sexual awakening. This is contrasted in his memory with the restrictions of life in Communist Poland of the 1970s and early 1980s. Delicately layered within this story is the ever-present history of the destruction of Warsaw during the Second World War and the later endurance of Poland’s population under martial law as the Solidarity Movement begins its struggle. Subtle, sensitive and finely controlled, this is a novel which explores conscience, choice and the price of both personal and political freedom. 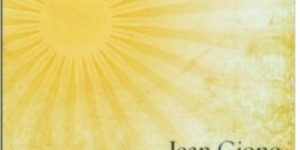 A stranger arrives in a remote farming community in southern France on a moonlit night towards the end of winter. Adopted by an elderly couple, he shows them and their neighbours a different way of life: working with nature rather than subduing it, planting communal crops, sharing the produce and encouraging mutual reliance. Fields are soon no longer solely used for cultivation but are planted with wild narcissi, horses are released from their servitude to roam freely. Lyrical descriptions rich in imagery of the land and the seasons celebrate joy – of the land, the weather, feasting together, sensuality, freedom. An idealistic, expressionist, sometimes mystical novel written during the rise of Fascism in Europe, Giorno experiments with a utopian way of life akin to an earthly paradise in a search for joy and hopefulness. 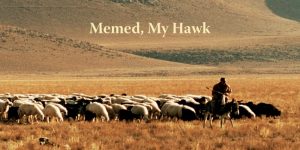 An epic tale of courage, daring, love, loss, betrayal, and loyalty, this fable-like novel is set against the backdrop of the cycles of the seasons, where events are enmeshed in working the land. Maintaining the rhythm and poetry of the oral tradition, Slim Mehmed’s life is recounted: from a childhood spent labouring in the fields for his overlord to his transformation into a bandit fighting for the freedom of the villagers suffering under the grinding poverty induced by Turkey’s feudal system. Written from Kemal’s own life experiences, growing up in this same region, where he began adult life as a bard, and where he too laboured in the cotton fields fighting for the rights of workers before becoming an acclaimed writer. Thus, although written as a gripping tale Kemal speaks from a place of knowledge, exposing the enforced dependency by the villagers on the fertility of the land, the weather and their Aga for survival in 1930s Turkey. 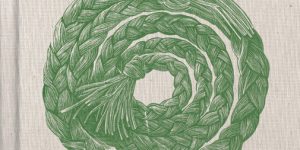 ‘Humans make agricultural soils by tilling; forest soils simply make themselves through a web of reciprocal processes that few have the chance to witness.’ Reciprocity is a deep seam running through Robin Wall Kimmerer’s Braiding Sweetgrass – a collection, ‘braid’ or ‘pharmacopoeia’ of short essays that draw on the strands of Kimmerer’s life as both a botanist and a member of the Citizen Potawatomi Nation – an ‘intertwining of science, spirit and story.’ Across five chapters (planting sweetgrass, tending sweetgrass and so on), Kimmerer weaves together formative experiences and memories – her own, those of her ancestors, her own children and her colleagues and students – of collecting pecans, gathering a handful of soil, picking strawberries, transplanting wild leeks – with stories of displacement, separation and extraction, all the while reminding us of what we may learn from the extraordinary processes by which plants live, thrive and give.