After John Cage: 'Writing through' Carlyle and Emerson 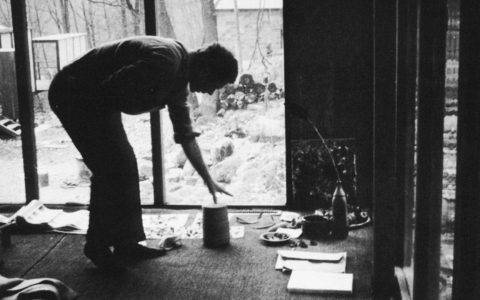 Following our recent online workshops led by Victoria Miguel, a writer and specialist in the work of artist and composer John Cage, we have been applying Cage’s process of ‘writing through’ – a method of using poetry to transform existing texts – to letters exchanged between the celebrated Scottish author and essayist Thomas Carlyle and the American writer Ralph Waldo Emerson.

Emerson visited the Carlyles at their home in Craigenputtock, Dunscore, Dumfriesshire in August 1833, and his life-long correspondence with Thomas Carlyle influenced fellow writer Henry David Thoreau, who wrote about Carlyle (and briefly about the Dumfriesshire landscape) whilst famously staying on Walden Pond on land owned by Emerson.

John Cage returned repeatedly to the writings of Henry David Thoreau as a source for his practice of ‘writing through,’ and during the workshops we explored some of Cage’s writing techniques, focusing in particular on his use of chance and the ‘mesostic’ process he used to make new texts from existing ones.

We then applied Cage’s process of ‘writing through’ to the correspondence of Carlyle and Emerson, using chance and the computer programme IC (developed for John Cage) to determine how many and which of the letters we would each use as source material for our writing.

All the participants have used the same key, JOHN CAGE, to create eight-line mesostic poems, using letters exchanged by Carlyle and Emerson from Boston, London, and Dunscore and Thornhill in Dumfries and Galloway.

Together they have produced 191 mesostic poems, mirroring the 191 known letters exchanged between the two writers.

Beginning 10 July, the 191 mesostic poems will be released in four volumes as short audiovisual recordings via our website. The first volume will be read by our Engagement Assistant Lucy Dale.

All four volumes will be brought together in a pamphlet later in the summer.

Victoria Miguel is a writer. Her work has been published and presented by Triple Canopy, Summerhall, and Glasgow International. She worked for the John Cage Trust (2001-2007) and has been a specialist in Cage’s work, creating unique performances, for more than a decade. In 2019, she produced ‘Mewantemooseicday’ 2019, a day-long celebration of Cage and Merce Cunningham developed in collaboration with the University of Glasgow, The Glasgow School of Art, and Dance Studio Scotland at Clyde College