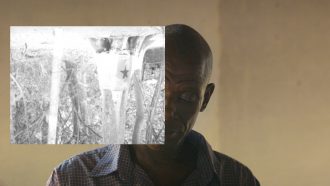 Please join us for this first screening in our Artist Film series. Throughout our programme to date, we have showed a number of extraordinary long-form films by artists and experimental filmmakers, some lasting over two hours. We invite you to join us for screenings and low-key discussion about unique films drawn from across the world.

Spell Reel centres upon the story of an archive of film and audio material in Guinea-Bissau in West Africa, which was originally commissioned in the 1960s as part of the decolonising vision of Amílcar Cabral, the liberation leader who was assassinated in 1973. Following a military coup in 2012, filmmakers Sana na N’Hada and Flora Gomes took the footage to Berlin for digitization. Two years later, inspired by Chris Marker’s visit to Guinea-Bissau (and during which he screened his own films in villages), N’Hada and Gomes then returned to present the digitized films in the places where the footage was originally shot.

With great poignancy, César’s film draws together excerpts of the original footage now digitised alongside her own footage of the screenings that took place first in Guinea-Bissau and then in Berlin, and the discussions that followed them. As Ela Bittencourt has said: ‘…the images gain new urgency by being reinserted into a public discourse. Spell Reel is about the importance of sharing images.’

Filipa César was born in 1975 in Porto in Portugal. She lives and works in Berlin. Her films films are concerned with the relationship between history, memory, image and narrative.

Part of our May You Live screening programme