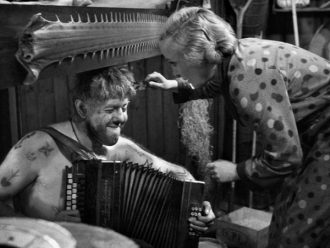 85 years on from its original release, Jean Vigo’s 1934 film L’Atalante remains as beautiful and poetic as ever.

The story is an apparently simple one: Three men work a barge (named L’Atalante) on the waterways of northern France: Jean, the skipper is young and hopeful (Jean Dasté), le père Jules, a tattooed veteran of the world’s oceans (Michel Simon) and a cabin boy. They stop at a small town. Jean meets a girl, Juliette (Dita Parlo), and they are married, while hardly knowing each other. It is not an easy transition for the married couple, and the barge itself becomes a lens for a captivating exploration of relationships and bonds.

The film is enhanced by Maurice Jaubert’s musical score and by Boris Kaufman’s extraordinary cinematography.