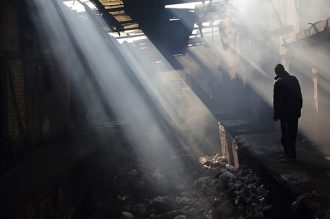 In our upstairs space, we will present Nika Autor’s haunting film Newsreel #63 over three days. Shown as part of the Slovenia presentation at the Venice Bienniale 2017, the starting point for the film was a shred of video taken on the once famous Belgrade to Ljubljana rail-line by two refugees travelling between the train’s wheels.

Newsreel #63 is part of a wider project by Nika Autor to revive the newsreel film form. Often working with collaborators, her Newsreels combine voice-over with quotations from films, archival footage and footage of current events. Newsreel #63 centres on trains as symbols of hope and despair, and presents a collage of a succession of undercarriages – from Buster Keaton to today’s stowaway migrants – along with footage of the old Belgrade-Ljubljana line.

Part of Surrender Your Tickets: screenings over three days, 13-15 July 2018