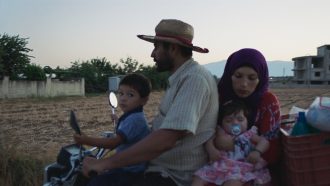 In 2012 an international agricultural research centre was forced to relocate from Aleppo to Lebanon due to the Syrian civil war and then began a laborious process of planting and restoring its seed collection from back-ups recalled from the Global seedbank located in Svalbard. Following the path of those seeds between the Arctic and Lebanon, Jumana Manna’s beautiful film unfolds a matrix of human and non-human lives across those two remote places, following a large-scale international initiative and its local implementation in the Bekaa Valley of Lebanon, carried out primarily by young migrant women.

Manna has said: ‘As someone raised in Jerusalem, educated in Norway this geographic connection and the symbolic resonances of the story caught my attention. It inspired me to build a narrative…which takes these two tiny spots on the earth, connected by a transaction of seeds, as a starting point.’