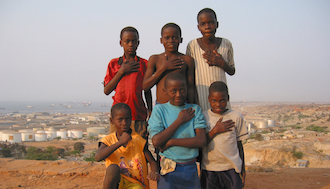 This is the first of three screenings at CAMPLE LINE of Alfredo Jaar’s beautiful and poetic work Muxima, filmed in Angola in 2005, followed with a talk by Clare Lilley, Head of Programme at Yorkshire Sculpture Park and curator of YSP’s current exhibition Alfredo Jaar: The Garden of Good and Evil.

Described as ‘a deeply moving work, at once restrained and intense’, the film features ten ‘cantos,’ each of which meditates upon a pressing issue in Angola at the time, as well as six versions of the same popular Angolese song, Muxima (meaning ‘Heart’ in Kimbudu). The first version of the song was composed in the late 1940s by Liceu Vieira Dias, leader of the group Ngola Ritmos and founder member of the People’s Movement for the Liberation of Angola, mixing rhythms and Angolese poetry with themes of fado and Brazilian music.

Please book via Eventbrite. You can also book by emailing us directly, particularly if, for instance, you wish to attend 1 or more of the talks: info@campleline.org.uk

With grateful thanks to Alfredo Jaar and Galerie Lelong, New York

Alfredo Jaar: The Garden of Good and Evil is on at Yorkshire Sculpture Park until 8 April 2018