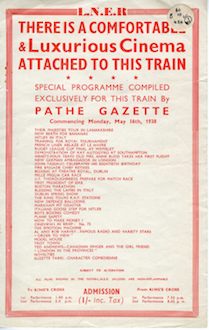 Film Historian Dr Rebecca Harrison (University of Glasgow) will talk about Britain’s cinema trains: operating between 1924 and 1989, they not only transported passengers to various destination around the country, such as London and Edinburgh, but also far-off locations represented on mobile screens. Now forgotten and overlooked as a footnote in railway history, Dr Harrison will discuss the everyday life of the trains, including their evolving designs, the films shown inside them, their links to Empire and eventual decline.

Dr Harrison is the author of a monograph From Steam to Screen: Cinema, the Railways and Modernity (I B Tauris), which will be published in November 2017.