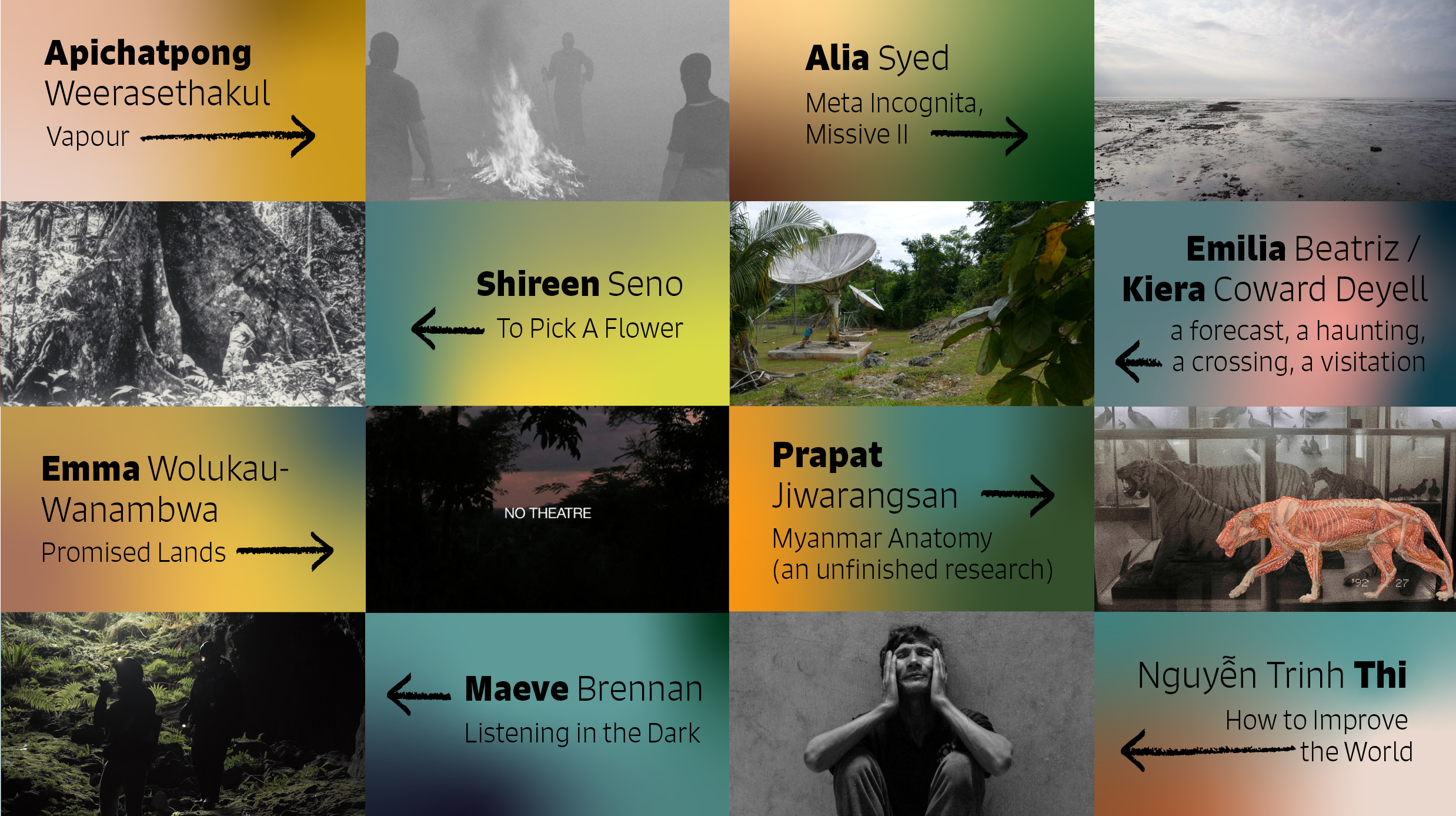 Optional SDH captions available for online screening throughout the programme

โลก(ไร้)รูป (Im)material worlds is an artists’ moving image programme that gives focus to the environmental crisis from Global South and postcolonial perspectives. It brings together recent and new moving image work by four Southeast Asian and four UK-based artists and filmmakers, who use experimental and essayistic forms to explore communities, habitats and places through their colonial, political, military and environmental histories. Spanning diverse terrains from the Puerto Rican island of Vieques to the peatlands of Cape Wrath in northern Scotland, the Central Highlands of Vietnam, coastal Mindanao in the southern Philippines, Lake Victoria in east Africa, and the route of the Yangon Circular Railway in Myanmar, the films within the programme share critical and pressing concerns that include land privatisation, environmental exploitation, the displacement of peoples, the destruction of ecosystems, the dilution of local traditions and cultures, and the denial of rights.

Read more about the programme

Through these films we encounter places, habitats and communities that have been made precarious, their futures uncertain, by institutions and practices rooted in imperialism, its legacies and its corporate and governmental iterations. Whilst Apichatpong Weerasethkaul and Alia Syed engage a seemingly elemental register in their films – thick cloud descending upon a village, the inevitable back and forth of the tide against a near empty horizon – they frame succinctly the abstract nature of government or state ownership as well as the questionable land management practices that exclude the rights of longstanding inhabitants. Films by Shireen Seno and Emilia Beatriz expose the limits of official histories, the mediums with which they were recorded and the repositories that preserve them, redrawing the archive with new subjectivities, speculations of meaning and modulations of voice. Likewise, concerns with language, memory and representation also inform the films of Emma Wolukau-Wanambwa and Prapat Jiwarangsan, which consider the arbitrariness of borders and boundaries as well as the politics of forced migration and displacement. Lastly, the films of Nguyễn Trinh Thi and Maeve Brennan challenge, respectively, the primacy placed upon visuality and the image and upon human scales of time as ways of knowing the world, instead returning focus to sound and aural experience across human and non-human spectrums, as well as to geological and evolutionary temporalites.

From these stories come notes of resilience, of hope and of healing. Beatriz’s a forecast, a haunting, a crossing, a visitation explores ways in which people come together collectively to protect and speak of the health of the land, their bodies and the climate. Elsewhere, for instance, Nguyễn Trinh Thi has talked of her sense of responsibility as a filmmaker to ‘look for a more balanced and sensitive approach in perceiving the world by paying more attention to aural landscapes, in line with my interests in the unknown, the invisible, the inaccessible, and in potentialities.’ As a whole, the programme calls attention to what Graiwoot Chulphongsathorn and Philippa Lovatt have described in their recent dossier as ‘the tremendous capacity and potential of the moving image to traverse multiple temporal and spatial scales and durations, to connect human and nonhuman histories through affective and imaginative experience, and offer us a glimpse into the possibility of a liveable future.’

(Im)material worlds is a collaborative curatorial project instigated by Graiwoot Chulphongsathorn (Chulalongkorn University) and Philippa Lovatt (University of St Andrews) with Emma Dove and Tina Fiske (CAMPLE LINE) and Kitty Anderson and David Upton (LUX Scotland) funded by the British Council’s ‘Connections Through Culture UK-Southeast Asia Grant.’ The programme stems from the publication of the Screen dossier ‘Tracing the Anthropocene in Southeast Asian film and artists’ moving image’ – a collection of essays co-edited by Graiwoot and Philippa that addresses the environmental crisis from the perspective of Southeast Asia.

About a forecast, a haunting, a crossing, a visitation

a forecast, a haunting, a crossing, a visitation focuses largely on Scotland and Cape Wrath, wherein a series of characters Uranio (Uranium), Agüita (an affectionate name for water) and Vientazo (a gust of wind), write letters to one another. The letters appeal to the water, the wind and the toxic land, speculating upon the navigation of bodily crisis, health and grief, speaking of the feeling of mourning environmental loss. Previously shown as a three-channel video installation, the film includes images from the Vieques Archive of Historical Memory, video footage of protests recorded by Vieques filmmaker Andrés Nieves, and posters and stickers of Scottish Vieques solidarity actions, filmed at the Park Ranger Archives at Durness Information Centre. The film is informed by these connections, and by oral histories from farmers and workers from Durness and Cape Wrath, where Emilia visited in October 2018. The film holds an oral history of fisherman, crofter and mini bus operator James Mather, framing stories of healing and activism through the ubiquity of peat and moss. The work also speaks of Scotland’s lesser told colonial history – the movement of ships and supplies across the Atlantic, and a Scottish ship’s five-day occupation of Crabb Island (the British name for Vieques) in 1698, as part of Scotland’s failed attempt to set up a colony in the Caribbean Gulf of Darién.

About To Pick A Flower

To Pick A Flower centres around Kolambugan, a coastal lumber town established by American businessmen on the southern island of Mindanao in the Philippines in 1912, which takes its name from a tree species that at one time grew abundantly in that area. Seno’s video essay incorporates archival photographs from the American Colonial Era in the Philippines (1898–1946), and explores what she has referred to as ‘the sticky relationship between humans and nature and their entanglements with empire’. Taking plants and trees as starting points, the film reflects on the intertwined roots of photography and capitalism in the Philippines; as Seno comments of particular images: ‘In these photographs I found of people in relation to nature, men were usually photographed as conquistadors, exerting their power over trees.’

Shireen Seno is an artist and filmmaker whose work addresses memory, history, and image-making, often in relation to the idea of home. A recipient of the 2018 Thirteen Artists Award from the Cultural Center of the Philippines, her films have won awards at Rotterdam, Shanghai, Olhar de Cinema, Vladivostok, Jogja-Netpac, and Lima Independiente and have screened internationally at festivals and institutions including TIFF, New Directors/New Films, Rencontres Internationales Paris/Berlin,Tate Modern, UCCA Center for Contemporary Art, Portikus, NTU Center for Contemporary Art Singapore, Taipei National Center for Photography and Images, National Museum of Modern and Contemporary Art (MMCA), Seoul, Museum of Contemporary Art & Design Manila, and MAIIAM Contemporary Art Museum, Chiang Mai. Seno will be a 2022 Film Fellow of the DAAD Artists-in-Berlin program. She and John Torres had their first solo exhibition in 2019 at Portikus in Frankfurt. In Manila, they run Los Otros, a critically-acclaimed film and video studio and platform committed to the intersections of film and art. She is also part of the collective Tito & Tita, whose work spans installation, film, photography, and collective action.

The clouds descend onto a village and engulf it for a day. They touch the roof tiles, the beds, the chairs, the carpets, the grass, and the bodies, infecting everything with the fever of white stupor. Of Vapour, Apichatpong has written: ‘Toongha village in Mae Ram district has been my home for the past eight years. I’ve learned that in its tranquility lay a hidden rage. The village is one of several areas in the country that are plagued with land management issues. It is a battleground between the people and the state. For the past sixty years, the villagers have petitioned for the ownership of the land in which their families had settled for generations.’

Apichatpong Weerasethakul grew up in Khon Kaen in north-eastern Thailand. He began making film and video shorts in 1994, and completed his first feature in 2000. He has also mounted exhibitions and installations in many countries since 1998. Often non-linear, with a strong sense of dislocation, his works deal with memory, subtly addressing personal politics and social issues. His 2009 project, Primitive, consists of a large-scale video installation, an artist’s book, and a feature film, Uncle Boonmee Who Can Recall His Past Lives. The film won a Palme d’Or prize at the 63rd Cannes Film Festival in 2010, making it the first Southeast Asian film (and the 7th from Asia) to win the prestigious award. In 2012, he participated in Documenta (13), one of the most well-known art exhibitions in Kassel, Germany. Apichatpong also received the Sharjah Biennial Prize at the 11th Sharjah Biennial and the Fukuoka Prize, Japan, both in 2013. In late 2014, he received the Yanghyun Art Prize, one of the most prestigious prizes in Korea. In 2016, a retrospective of his films was presented at Tate Britain, and he was the Principal Laureate of the 2016 Prince Claus Awards, the Netherlands. He has just released Memoria, his first feature length film shot outside of Thailand. Apichatpong currently works and lives in Chiang Mai, Thailand.

Set in the near future, Meta Incognita: Missive II is built around the audio log of a renegade female captain of a ship smuggling an illegal commodity from the Arctic to England via the North West Passage. Her journey is based on the exploits of the Elizabethan privateer turned explorer Martin Frobisher who, to make up for his failure to find the North West Passage, embarked on a further voyage to bring Elizabeth I back vast quantities of gold, only to discover that he had in fact brought back Iron Pyrite or ‘Fool’s Gold’.

The film consists of two shots, sunset and sunrise, filmed off the Essex coast at the mouth of the Thames, on a Public Right of Way called the Broomway, which was until the 1930s, the only way onto Foulness Island from the mainland. Recorded in real time, each 20-minute shot documents tidal currents, wind patterns and the setting and rising of the sun, within the backdrop of public information bulletins derived from the Twitter account of the international arms manufacturer QinetiQ who lease the land.

The natural rhythms of the location serve as a nexus for observations in sound and writing bringing together the traces of wind, water, and light; stories excavated from strata of lands plundered, now gasping for respite. The film takes its name from Meta Incognita or ‘unknown limit’, a term coined by Elizabeth I of England in her drive to increase her empire. It is also the name given to a peninsula in the Qikiqtaaluk Region of North West Canada by Martin Frobisher when he claimed the land for The Crown.

Alia Syed was born in Swansea. She grew up in Glasgow and now lives and works in London. She is an experimental filmmaker whose work has been shown extensively in cinemas and galleries around the world. She is interested in storytelling, time and memory, and the juncture of personal realities which she explores through different subject positions in relation to culture, diaspora and location. Syed’s films have been shown at numerous institutions around the world including Los Angeles County Museum of Art, Moscow Biennale; Museum of Modern Art, New York, Museo National Centro de Arte Reina Sofia, Madrid, the Sydney Biennale , Hayward Gallery, London, Tate Britain, London, Glasgow Museum of Modern Art, INIVA, London, The New Art Gallery in Walsall, and Tate Modern, London, WKV, Stuttgart and Yale Centre for British Art. Syed’s films have also been the subject of several solo exhibitions at Talwar Gallery in New York and New Delhi. Alia was the Artist in Focus at the Courtisane Festival in Belgium in 2019 and at Open City Documentary Festival in 2021. She was nominated for the Jarman Award in 2015 and a Paul Hamlyn Artist Award in 2020. 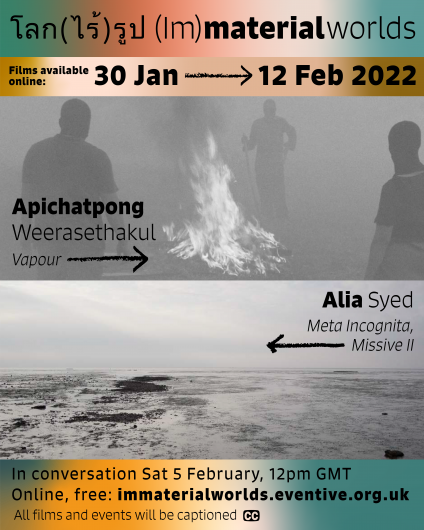 Want to hear about future online screenings?
Join our Film at Cample mailing list to keep up to date.

Return to Film at Cample