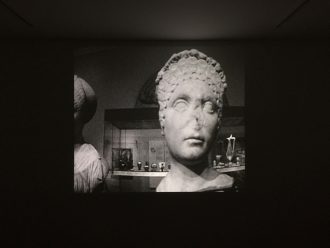 Filmed on super 8mm and transferred to DVD

As part of our programme Stone-Like Things, and alongside Lorna Macintyre’s new exhibition SPOLIA, we are pleased to screen this beautiful 8 minute long film by Brooklyn-based filmmaker Jem Cohen, which he shot on Super 8 whilst in London in 1997. The film includes footage shot inside and outside the British Museum and the Victoria and Albert Museum, and comprises a brief but beautiful meditation upon human presence, objects, permanence and the fleeting. The camera’s attention falls not only on images of faces, figures, cavities and fragments, rendered in stone and plaster, but the expressions, postures and gestures of those very much alive.

Cohen has only recently released this short film alongside his feature length film Museum Hours (2012), and he has suggested that it provided the kernel for the later film. Cohen’s prolific body of work – more than 70 films over three decades – is widely considered as one of the most significant in international independent cinema.

With grateful thanks to Jem Cohen