Skip to content
Return to Screenings at home archive 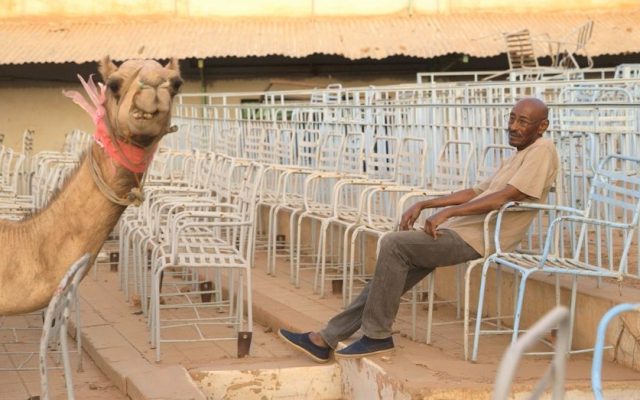 Together they form the Sudanese Film Club, founded by them in 1989, the year Omar al-Bashir led a military coup in Sudan. Unable to make films for years as a result of the oppressive regime that followed, Gasmelbari’s film focuses on their bond and on their shared commitment to revive film-making and cinema-going against a backdrop of continuing restrictions and endless bureaucracy.

Of the four filmmakers, director Gasmelbari has said, ‘they have made few films, but they consider the history of cinema as their own. They have written about cinema while knowing perfectly well that they have few or no readers, they are conscious of the paradox of writing about cinema in a country where cinema doesn’t exist any longer, but they did it…Hence the necessity for this film, to render justice to these men and their work. They were the pioneers, the first people to leave the country in order to study cinema and come back to attempt to create a cinema that was artistically ambitious in Sudan, in an era when the only cinema possible was to make propaganda films for the regime. They faced all sorts of problems—political, administrative, social, financial, but never lost their desire for cinema, their desire to create or their desire to show films made by others.’

Whilst the history of Sudanese cinema sits at the centre of Talking About Trees, Gasmelbari’s film also sheds light on Sudan’s recent context, shaken as it has been by on-going crises. The film itself takes its title from Bertolt Brecht’s poem ‘To Those Born Later’: ‘What kind of times are these, when/To talk about trees is almost a crime/Because it implies silence about so many horrors?’

Watch Talking About Trees
If you missed our online screening, the full film is available to rent via BFI Player

Return to Screenings at home archive

This online screening was part of Film FeelsConnected, a UK-wide cinema season, supported by the National Lottery and BFI Film Audience Network.  Explore all films and events at filmfeels.co.uk