Thurs-Sat, 11am-5pm, or by appointment

Thurs-Sat, 11am-5pm, or by appointment 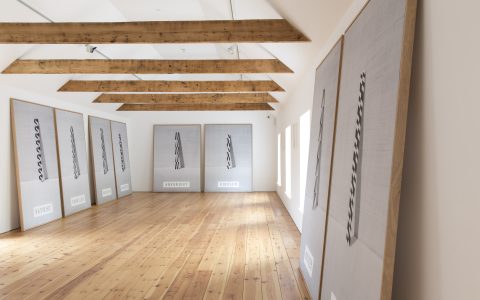 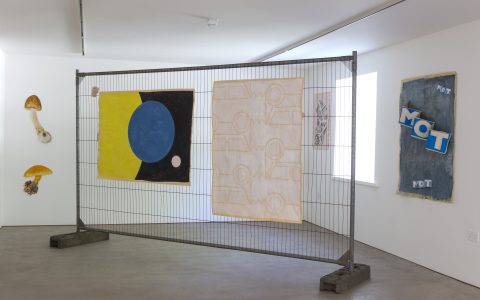 Enjoy this short film of Charlie and David in conversation, introducing their respective exhibitions.

Click on our exhibition booklet to read their full conversation 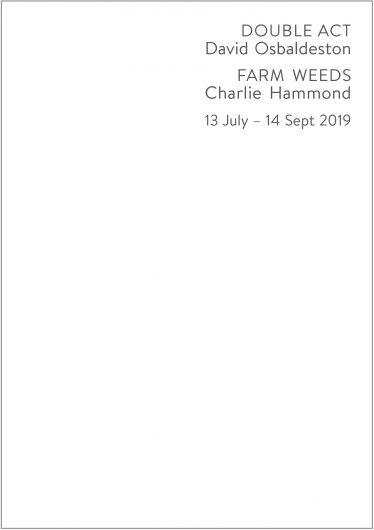 Responding to the theme of laughter, Osbaldeston has made a series of large printed works from his UNTITLED (Generalised Laughter Series), which features propped abstract forms alongside descriptors that allude to the dynamics of the comedic duo or double act. At two metres in height, these works have been made in parallel with Somewhere Between My Finger and Thumb, a new sequence of small gouache paintings the artist has made using pages from the 1875 book The Philosophy of Laughter by George Vasey.

David Osbaldeston: ‘Humour is a mode of communication, which is very human and has its own life – we know it and we recognise it. It’s a way in which relationships can be formed. It just made sense to think about laughter, humour, comedy – they’ve always been elements in the way in which I’ve thought about making work and they are central to the way in which I approach making work. Not just as a form of entertainment, but as a way to react to certain situations. I’m quite excited about the new works, which will operate very differently in presentation than my previous series on deception for instance, insofar as they’ll be presented as doubles rather than as multiples ...

Comprising a new group of paintings on paper that will include flags, logos, fingers, newspapers and fungi to name but a few elements, Hammond has referred to it as ‘An imaginary proposal for an imaginary mural’, loosely drawing on a range of sources, from Illinois farmer James W. Cadle’s 1970s design for a ‘Flag of Earth’ to a small book published by Shell in 1958 entitled Farm Weeds: An Aid to Their Recognition, as well as everyday things that populate Hammond’s studio and the wider setting of Cample itself.

Charlie Hammond: ‘The body of work that I am making for Cample I have elsewhere referred to as “an almost proposal for a wall mural”. I like the idea of a false proposal for a wall mural – a wall mural that’s never going to exist, and within that kind of approach I would be able to have fun. It allows me to bring in lots of things I’m reading and looking at, so that, within the work for Cample, there could be fungi, there could be cars, and there could also be a particular flag I’ve become interested in – a so-called Earth Flag dating to the 1970s. These are all graphic moments that feed into a structure or set of rules I’ve given myself to create paintings.’