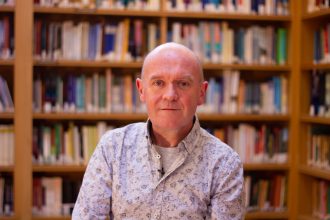 Poet and writer Stuart A. Paterson reads from Jean Giono’s novella The Man Who Planted Trees (1953)

Join us for this special event with poet and writer Stuart A. Paterson as part of Book Week Scotland. We are delighted that Stuart will read in Scots from Jean Giono’s beautiful story The Man Who Planted Trees, and also drawing on some of his own poetry.

In 1910, while hiking through a desolate valley in Provence, a young man meets a shepherd who he watches sort and then plant hundreds of acorns. On visiting the shepherd ten years later, he sees a young forest now spreading slowly over the valley, which then gradually over the years becomes a living, green landscape. Giono’s is an enduring tale that speaks of the accumulating impact of small actions and the power of individual efforts that attend with care to the world around us.

In translating The Man Who Planted Trees into Scots, Stuart has said ‘Scotland’s very own Robert Louis Stevenson famously wrote “Don’t judge each day by the harvest you reap, but by the seeds that you plant.” This story is a magical seed itself which continues to be planted across the world and is as relevant to the glens of Scotland in 2020 as it was to the valleys of Provence in 1953. Lug in and find out why!’

Stuart A. Paterson has been one of Scotland’s best known poets over the past 30 years. He was voted Scots Writer of the Year at the national 2020 Scots Language Awards. A native Scots speaker, he lives in Galloway and was recently the official BBC Scotland Poet in Residence.