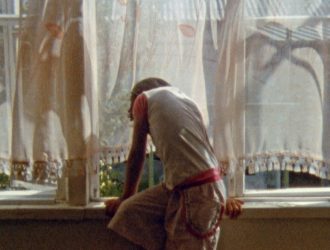 Shot in Kyrgyzstan on richly saturated Super-8mm, French filmmaker Aminatou Echard takes up the title character of Jamilia – the 1958 novel by Chinghiz Aytmatov – as a pretext through which to speak to Kyrgyz women of all generations about their own lives.

A modern classic in Kyrgyzstan and set during the Second World War, the novel Jamilia tells the story of a free-spirited heroine who falls in love with a wounded and solitary young man, Daniyar, while her husband is away on the front.

Over the course of her film, Echard introduces contemporary Kyrgyz women who she invites to talk about Jamilia as a literary heroine and indeed a cultural figure. They variously project themselves onto her, and in turn reveal their own private lives and desires, the social rules of contemporary Kyrgyzstan, and their ideas of freedom.

Their candid answers, recorded in audio interviews separated from the film’s grainy Super-8mm images, gives Echard’s Jamilia the confessional intimacy of home movies. Through the capture of these personal reflections, interpretations and associations the film speaks of the influence and interpretation of the novel across decades of the nation’s history and into the post-Soviet present.

‘Echard’s film juxtaposes the gorgeously composed visuals of day-to-day life with the powerful voices of the women of Kyrgyzstan. Connecting literature, reality, past, and the present, Echard’s film is a testament to the importance of women’s stories.’ —The Arts Fuse

Aminatou Echard (b. 1973) is a French filmmaker. She studied Ethnomusicology and Cinema History in Paris and Bologna. As an artist who works with experimental film and documentary, Aminatou’s focus is how space transforms people and how people inhabit spaces. She conveys this idea by exploring the relationship between sound and image. Fieldwork is a crucial element in her artistic practice. After four years of working in Bolivia in ethnomusicology, she started a new project in Central Asia (Kyrgyzstan, Uzbekistan and Kazakhstan) in 2006 by collecting super 8 images and sounds to gain an understanding of the specific relationship between spaces and people.

Live online discussion on Wednesday 25 November at 8:30pm – this event will be live captioned

A PDF transcript of the discussion will be available on request