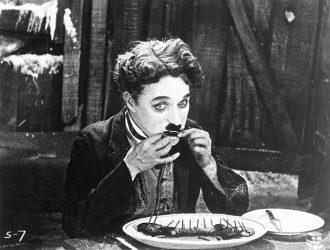 During the Gold Rush, prospectors brave Alaska’s dangerous Chilkoot Pass, hoping to strike it rich in the snowy mountains. Just as Big Jim McKay discovers gold on his claim, a storm arises, prompting a Lone Prospector to take refuge in a cabin. Unknown to him, the cabin’s occupant is desperado Black Larsen, who attempts to throw the vagabond Prospector out. Strong winds, however, repeatedly blow him back inside, and soon after, Jim is also swept into the cabin. Jim fights with Larsen over his shotgun, and after Jim prevails, the Prospector claims him as a close friend in order to remain safe. Over the next few days, the three men live together uneasily, their hunger growing as the storm rages on.

Saturday 18 August is the second of three screening events that make up the There’s Talk of Gold film weekend. This programme uses the two lectures given on Gold at the Thornhill Institute in the 1850s and 1860s as the pretext to exploring contemporary and international film surrounding this topic.