Screening and Q&A
Ittarikitari – To & Fro 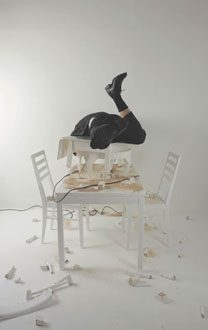 ‘Japan has endured major events – the great earthquake, the sarin gas attack, the tsunami and nuclear disaster of 2011. The devastating and deeply felt impacts of the tsunami, in particular, have had a fundamental impact on Japanese society and how artists see themselves and their role within community. New artists collectives have been emerging whose work is experimental, radical, surprising and who are making their voices heard through action and performance. It has been incredibly inspiring to witness this and to be able to share with audiences in Scotland.’

Throughout the selected work there is a strong emphasis on improvisational performance and extreme physicality in what may appear to be, on occasion, absurd or inherently dangerous situations. The artists’ approaches will intrigue dance audiences, as well as appeal to people who are passionate about our place and relationship with the environment.

Following the screenings artist Neville Gabie and Susan Christie will be in conversation.

With a background in sculpture, Neville Gabie’s practice has always been driven by specific locations or situations caught in a moment of change. Highly urbanized or distantly remote, his work is a response to the vulnerability of place. Gabie’s interest is in establishing a working relationship within a particular community as a means of considering its physical, cultural or emotional geography. Neville was born in Johannesburg, South Africa and studied an MA in Sculpture at the Royal College of Art, London 1986/88. He is represented by Danielle Arnaud Gallery, London.

Experiments in Black and White XXV is a filmed artist performance involving chopping domestic furniture. The work is one of a series of performance films under the title of Experiments in Black and White. Initiated whilst artist in residence at Bristol University work with climate change scientists, the work is a response to our need for certainties in an uncertain world.

Painting was made for Croxteth Hall Liverpool in response to Robert Tressell’s book ‘The Ragged trousered Philanthropist’. The book is a critical text in the formation of the Labour movement and Trade Unions. Robert Tressell was a painter/decorator who died in poverty in Liverpool and is buried in a pauper’s grave. The book was published posthumously.

Founded in 2006, contact Gonzo is an improvisational performance group based in Osaka, Japan. The collective has developed a specific mode of contact improvisation that borrows from various sources including martial arts. Their practice involves physical strength and agility, and relies upon the trusting relationships within the group. contact Gonzo balances elements of contemporary dance and performance, and creates highly experimental and unexpected work that surprises and amazes audiences.

hyslom is a three-member collective consisiting of Itaru Kato, Fuminori Hoshino, Yuu Yoshida, formed in 2009. hyslom turns “field-play”, their method for physically and playfully experiencing a given environment, into video, photography, and performative artwork. The group further develops the memories of “field-play” into a wide array of other media, including sculpture, theatre, and film.

hyslom has spent the last 10 years regularly exploring a particular landscape, which has become a large-scale housing site, to document and interact with the changes that have been taking place. Their work is highly physical and often surprising; they use their bodies in unexpected locations and in challenging ways to maintain a deep connection with the land. At the end of 2018 a large survey show spanning a decade of their practice was exhibited for the first time in Japan.

Chim↑Pom is an artist collective formed in 2005 in Tokyo with members Ryuta Ushiro, Yasutaka Hayashi, Ellie, Masataka Okada, Motomu Inaoka, and Toshinori Mizuno. Several weeks after the tsunami of 2011, members of Chim↑Pom travelled to Fukushima. With young fishermen from the local community, they made an improvised performance KI-AI 100 (100 Cheers). Ki-ai is a martial arts term for a shout that is used to focus energy and breath before an attack. This filmed action symbolises the way Chim↑Pom respond to situations with urgency, humour and warmth.