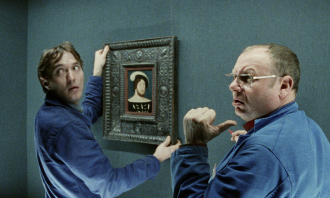 In 1988, the Louvre Museum let a film crew, led by director Nicolas Philibert, behind the scenes to follow the museum workers as they went about re-installing the collection. Miles of underground passages, reserves containing thousands of priceless treasures, and chambers previously off-limits to visitors were filmed over a five-month period, revealing with great immediacy the hidden inner workings of a world-famous institution.

‘The works of art, revealed in a new context, come alive as fragile and exotic creatures captured in a web of human labour’ – Leslie Camhi, The New York Times