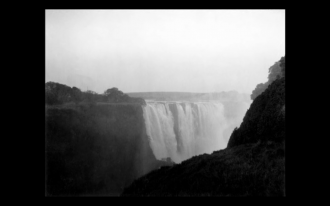 Ethnologist, explorer, hunter and adventurer – Count Eric von Rosen led a chequered life, characterised by profound contradictions: genuine interest in the native population of Africa on the one hand and colonial racism on the other hand. Filmmaker Peter Nestler embarked on a historical journey in search of traces of his grandfather. Tod und Teufel is a video essay about the expeditions of Eric von Rosen ( a subject of Jacqueline Hoang Nguyen’s Black Atlas), and illustrated with photographs he took alongside texts from diaries, publications and letters he wrote.

‘Nestler has said that he was reluctant to make a film about his grandfather (‘his path along the abyss gave me an eerie feeling’), but the weight and power of the existing materials convinced him. Von Rosen not only wrote scientific books and anthropological studies, but also documented all his trips with photographs and diary annotations. He made amateur movies, collected objects and utensils, and wrote political commentaries for the press’ – Cristina Álvarez López