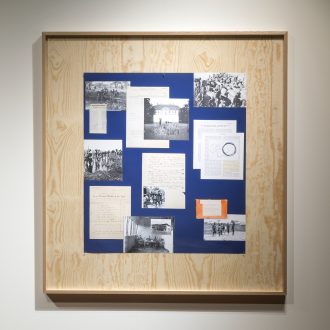 Our programme this spring brings together a wide range of stories about people and the objects, things and goods that define their lives, places, occupations, identities or legacies. Spanning two centuries and a wide geographic scope, those stories place a common focus on human efforts, actions and acts that acquire, gather, transport or protect objects. As part of that programme, we are delighted to present three works by three artists: Jacqueline Hoang Nguyen, Maeve Brennan and Laura Waddington.

From March to May, our upstairs space is given over to Black Atlas (2016), a five-part installation by Stockholm-based Canadian artist Jacqueline Hoang Nguyen. Based on photographs that Nguyen found in the archives of the Museum of Ethnography in Stockholm, Black Atlas reflects upon the nameless porters and caravan workers who transported an array of objects from distant countries to the museum’s storage on behalf of some of its prominent benefactors. Nguyen has said that ‘Black Atlas shifts the viewer’s attention from singular world travellers and individuals to the deployment of local labour.’

Screening daily in counterpoint to Black Atlas are two films that explore related threads in our contemporary world. Laura Waddington’s film CARGO (2001, 29mins) evokes the contradictions of a global freight network that services the movement of goods at the expense of the freedoms of the people that crew its ships. Based on a six-week journey she made on a container ship with Romanian and Filipino sailors, Waddington has said of CARGO ‘it falls between reality and fiction. It was a way of showing the limbo these men were living in.’

Maeve Brennan’s The Drift (2017, 50mins 29sec) traces the shifting economies of objects in contemporary Lebanon through three individuals: Fakhry, Mohammed and Hashem. It draws out their embodied knowledge of materials and things – Fakhry guarding the Roman temple he rebuilt, Mohammed replacing salvaged car parts as he talks, Hashem silently repairing ceramic fragments – in contrast to the exploitative practices we glimpse at the sharper edge of conflict.

Maeve Brennan, The Drift (2017, HD film, 50mins 29 sec)
Produced by Spike Island, Bristol and Chisenhale, London, and commissioned by those venues along with The Whitworth, Manchester, and Lismore Castle Arts.
Courtesy of the artist

*Total running time of CARGO and The Drift is 80 mins