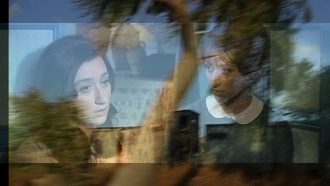 Train-Trains: A Bypass is Stephan’s second film focusing on collective and personal memory in relation to decommissioned train lines. Here she follows the traces of the old line linking Lebanon to Palestine, a coastal route that was part of the so-called Orient Express and Egypt lines before being put out of service. Stephan originally filmed the material in 1999 – as a personal vision of post Civil War Lebanon, focusing on rural residents living near derelict stations.

Train-Trains: A Bypass will be followed at 6.30pm by Sompot Chidgasornpongse’s Railway Sleepers, 2016
A combined ticket price for both films is available for £6